The Coalition is an all-volunteer, 501(c)(3) preservation organization whose mission is to identify, preserve, and interpret the rich World War II legacy of Southeastern North Carolina.

On February 23, the Coalition dedicated the giclee and installed it in the lobby home front museum of the Hannah Block Historic USO/Community Arts Center, at Second & Orange Streets. The giclee, produced by the original artist John M. Barber (oil on linen) for the Memorials dedication in 2004, was donated by Wilmington resident COL Kenneth S. Pond, USA (Ret.), former executive director and chief operating officer of the American Battle Monuments Commission – the man who built the Memorial. He was the keynote speaker.

The Murray documentary was produced by South Carolina public television (etv) in 2012, and features a recap of his Medal of Honor action near Kaysersberg, France, in December 1944. Murray (1921-2011) graduated from New Hanover High School in 1938 and is buried in Arlington National Cemetery.

Other new exhibits included the remnants of a champagne bottle which launched the Liberty ship SS Roger Moore at the Wilmington shipyard in 1943, and accompanying photo of th Moore family launching team; the Coast Guard uniform of Wilmingtonian Swift Boatwright; and the WWII decorations and memorabilia of Wilmingtonian John J. Burney, Jr., who fought with the 63d Infantry Division in France and Germany, including original paintings of his unit in combat scenes painted by a French artist friend.

H.R. 864 would direct the Secretary of Veterans Affairs to designate at least one city of the United States each year as an American World War II City, and for other purposes. Those purposes would establish criteria for selection – contributions to the war effort, and preservation efforts since – and designate Wilmington as the first.

In April 2012 the House Committee on Veteran’s Affairs passed H.R. 4072, a composite bill containing the appropriate portions of Congressman McIntyre’s original bill, H.R. 2717 (which had 66 co-sponsors). It essentially would have accomplished the same as H.R. 864. H.R. 4072 did not reach the House floor for a vote before the 112th Congress adjourned in December.

2013 action in the Senate is pending awaiting House action. We have worked with the staffs of N. C. Senators Richard Burr and Kay Hagan on their support for a companion bill or a plan to move it forward once it reaches the Senate. Senator Burr is the ranking member of the Veterans Affairs Committee, to which such legislation would likely be referred.

Before the U.S. House of Representatives Committee on Veterans Affairs Subcommittee on Disability Assistance and Memorial Affairs on H.R. 2717 To direct the Secretary of Veterans Affairs to designate one city in the United States each year as an American World War II City, and for other purposes.

Thank you for giving me the honor and privilege to appear before your subcommittee today to testify on H.R. 2717, a Bill introduced by my Congressman, Mike McIntyre of North Carolina, which would direct the Secretary of Veterans Affairs to designate one city in the United States each year as an American World War II City, and for other purposes, including the designation of my home town, Wilmington, North Carolina, as the first to be so designated and honored.

I am a retired Navy captain, military historian, author of 17 books, a Wilmington native who grew up there during the war, and chairman of the all-volunteer, 501(c)(3) World War II Wilmington Home Front Heritage Coalition, whose mission is to identify, preserve, and interpret the rich WWII legacy of Wilmington and Southeastern North Carolina.

Sixty-seven years after the end of World War II, Wilmington is the only city of which I am aware that can claim the title of America’s World War II City, a title proclaimed by our local elected officials and Congressman McIntyre.

Now we seek national recognition as the first American World War II City for both our region’s mighty contributions to the war effort, and our amazing accomplishments in preserving our history since then. We are totally confident we exceed the H.R. 2717 criteria required for such designation, which we present in the following narrative as the Coalition’s Thirteenth Year Progress Report, 2000-2012.

But H.R. 2717 reaches beyond just designating Wilmington as the first WWII City. Most importantly, it establishes a process within the Federal Government to allow ALL cities with significant WWII history to vie for this designation – a major step in the continuing preservation of our national heritage, and long overdue before sites disappear, memories fade, artifacts are lost, and participants die.

On behalf of Wilmington, New Hanover County, and the State of North Carolina, I strongly urge passage of H.R. 2717, and immediate liaison with the Senate on a companion bill to be resolved for the President’s signature during this Session of Congress.

Following proclamations in 2008 by the Wilmington, North Carolina, City Council and New Hanover County Commissioners, Wilmington proudly claims this title. To our knowledge, no other city makes this claim after 67 years since the war ended. The claim is based on our region’s vast contributions to the war effort, varied war industries, all five armed forces based here, its strategic location, and the record of its residents serving in uniform. Additionally significant is our success in preserving this WWII history. In both 2008 and 2011, our Congressman, Rep. Mike McIntyre (7th District, N. C.), inserted a WWII City proclamation in the Congressional Record. Now we seek national recognition.

Of note: The president of the National Trust for Historic Preservation wrote Congressman McIntyre on May 10, 2011, praising Wilmington’s extraordinary role in the Second World War and its equally impressive accomplishments in preserving and interpreting that history. We fully support the efforts of the World War II Wilmington Home Front Heritage Coalition to obtain national recognition…. 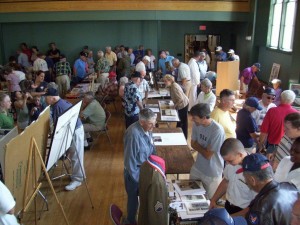 In 2011 Congressman McIntyre introduced legislation in the U.S. House of Representatives (H.R. 2717) to establish a process within the Department of Veterans Affairs to designate cities as an American World War II City, with Wilmington being designated as the first to receive this honor. The criteria are: what did your city do to support the war effort, and what are your efforts to preserve that history?

In March 2012 the bill has 36 House co-sponsors. Congressman McIntyre’s staff is working with the staffs of North Carolina Senators Richard Burr and Kay Hagan to develop a companion bill in the Senate.

H.R. 2717 resulted after attempts by the Congressman and the Coalition to identify national organizations in a position to grant Wilmington alone as America’s WWII City. None, such as the National Trust, Smithsonian Institution, National USO Headquarters, and the American Battle Monuments Commission, has the authority. So, federal legislation appeared to be the solution.

The World War II Wilmington Home Front Heritage Coalition is an all-volunteer, 501(c)(3) corporation of organizations, agencies, and individuals collectively supporting our efforts to identify, preserve, and interpret the rich WWII history of Wilmington and Southeastern North Carolina. The Coalition is the catalyst for developing and leading such preservation efforts. The emphasis is on New Hanover County, which then was the region’s economic, industrial, financial, business, social, and entertainment hub. 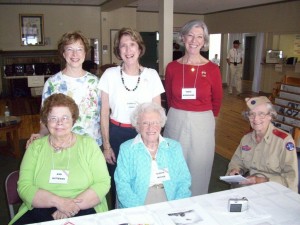 The Coalition operates and is administered within its By-Laws. Directors meet annually in the spring.

Coalition Board of Directors

Coalition Supporters, such as the evolving partial list on our letterhead, are organizations and individuals who help us accomplish our mission. Their support includes recognition, advisory, financial, government relations, project-related, public relations-related, and endorsements, and as volunteers. No membership responsibilities are asked; no dues, no meetings, no elections, no surveys, no obligations only support.

During WWII, Wilmington and Southeastern North Carolina fully exceeded this criterion, as follows:

Official Wartime Designation: The Defense Capital of the State
aka: The Country’s Unique Wartime Boomtown 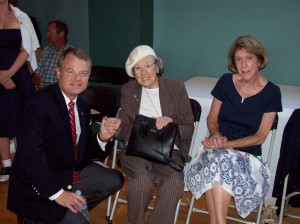 Since WWII, really since 1998, Wilmington and SENC have exceeded this criterion, as follows:

Accomplishments Working with the Community

Since its founding in 2000, following its forerunner organization – the highly successful, award-winning 125-event Wartime Wilmington Commemoration in 1998-99 – the Coalition has accomplished or participated with others in accomplishing numerous projects to preserve our region’s WWII history. Our primary partners have been the City of Wilmington and New Hanover County, and organizations such as the Thalian Association, Community Arts Center Accord, New Hanover High School Class of 1943, Cape Fear Museum of History and Science, New Hanover County Schools, and Community Boys & Girls Club.

Our major accomplishments include: 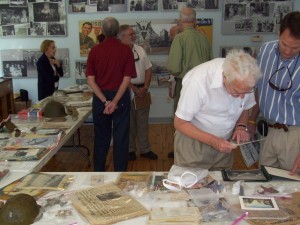 — The lobby area is restored to its wartime appearance and hosts a museum of the Southeastern N. C. home front.

— The building is on the National Register of Historic Places.

— Exhibits of WWII Army and Marine uniforms and female hostess outfit worn at the USO; model of Liberty ship built in Wilmington.

— Numerous original USO artifacts and reproductions of items sold to the servicemen;

— With NHHS class of 1943, produced Wilmington Medal of Honor Day to dedicate the memorial.

To educate the public and preserve history, the Coalition chairman has:

– For print media and periodicals, he either wrote, or has been a principal source for, more than 175 articles, op-ed pieces, features, editorials, and letters to the editor on SENC WWII history;

– For radio and TV media, he has given approximately 100 interviews on SENC WWII history.

– Has delivered more than 500 lectures and other presentations on WWII history to various groups globally, including schools; mentors students; exhibits his boyhood wartime memorabilia collection saved while growing up in Wilmington during the war; and leads WWII site tours of SENC.

– In 2006, he received the Award of Merit for his preservation achievements from the American Association for State and Local History; in 2005, the N. C. Society of Historians named him North Carolina Historian of the Year (East). 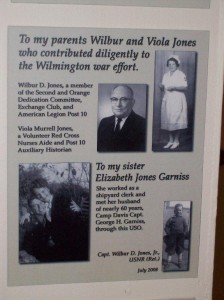