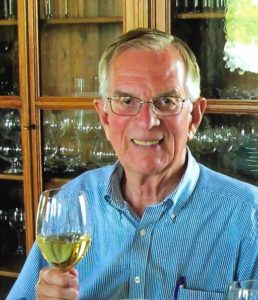 Wilbur D. Jones, Jr., is a nationally known, award-winning author and military historian in  Wilmington, N. C. A Wilmington native, he grew up there during World War II, which shaped his  life.

He holds a University of North Carolina history degree, is a retired Navy captain and a former  assistant and advance representative to President Gerald Ford. He served the Department of  Defense for 41 years, the last 12 as a Defense Acquisition University professor and associate dean.

His 19 books include 7 on World War II, and 2 on wartime Wilmington and Southeastern North Carolina. He has written hundreds of articles for the Wilmington Star News, a Gannett newspaper in the USA TODAY NETWORK.

For 12-1/2 years, he conceived, organized, and led a successful project seeking national recognition for  Wilmington as the first “American World War II Heritage City,” working with the state’s  congressional delegation. In March 2019 President Trump signed into law a bill sponsored by  Sen. Thom Tillis and Rep. David Rouzer establishing that national preservation program. On September  2, 2020, at the Battleship North Carolina, Trump announced the designation by the Secretary of the  Interior of Wilmington as the first World War II Heritage City, calling out Jones in prepared  remarks.

His memoir, “The Day I Lost President Ford: Memoir of a Born-and-Bred Carolina Tar Heel, was published in 2021.

He grew up in his native Wilmington during WWII and graduated from Forest Hills School and New Hanover High School in 1951. At NHHS, he began his lifelong writing career as editor of the Wildcat, and from 1950 for three years was a part time sportswriter for the Wilmington StarNews.

“Remembering how I began, I was born to be a writer, military historian, and career officer serving my country. Fortunately, with God’s gifts, I was able to climb many foothills, if not a few mountains,” he wrote.

Wilbur graduated from the University of North Carolina in 1955 with a history degree. At Carolina he played on the varsity lacrosse and soccer teams, was president of the Monogram Club letter-winners, and wrote for The Daily Tar Heel.

He possessed a lifelong burning interest in military history, national defense, and service to country and community. Seven years old when the United States entered WWII, he played war games supporting the war effort. He captures these home front experiences in two award-winning books on wartime Wilmington and Southeastern North Carolina: A Sentimental Journey: Memoirs of a Wartime Boomtown; and The Journey Continues: The World War II Home Front.

Of his books on military history (7 on WWII) and national defense, the most popular national book is Gyrene: The World War II United States Marine.

Wilbur has given hundreds of military history presentations since 1998, including on the Queen Mary 2,  the National Archives, C-SPAN Book-TV, and U.S. Navy Museum. He is a frequent source for national and regional media, and a frequent correspondent/columnist and source for the Wilmington StarNews.

A fervent supporter of UNC Wilmington’s Randall Library, he brought in numerous personal papers to special collections, and bequeathed to Randall his enormous military history collection.

As 2000 co-founder and since chairman of the all-volunteer, 501(c)(3) WWII Wilmington Home Front Heritage Coalition, whose mission is to identify, preserve, and interpret the rich North Carolina legacy, he helped lead state historical preservation

Since early 2008, he conceived, organized, and led the 12-1/2 year national history preservation project resulting in Wilmington’s designation by the Secretary of the Interior in September 2020 as the first “American World War II Heritage City.” He worked closely with Senator Thom Tillis and Congressmen David Rouzer and Mike McIntyre. He was proud that President Donald Trump visited Wilmington then to announce the designation and called him out: “You are just a tough cookie.”

In 1956 Wilbur was commissioned as an ensign from Officer Candidate School, beginning 28 years of service: 14 on active duty, and 14 drilling in the Ready Reserve.

He served nearly 41 years in the Department of Defense as a Navy officer and civilian Professor and Associate Dean of Information at the Defense Acquisition University. This included 7-plus years in the Pentagon as a captain and later civilian assistant to the Under Secretary of Defense for Acquisition.

While on Mediterranean duty, he met Carroll Robbins, his commodore’s daughter, and married her in Naples, Italy, in 1959. Besides Italy, they lived in Coronado and Los Angeles, CA, and Mount Vernon and Alexandria, VA, before moving to Wilmington in 1997. She died here in 2013 following 54 years of marriage.

In the Ready Reserve, he commanded both an ordnance logistics support unit and Atlantic Fleet Naval Beach Group Staff 106, an amphibious assault support unit; and served on a NATO unit. Promoted to captain in 1977, he retired in the Pentagon in 1984.

His interest in Republican politics began as a volunteer for Senator Barry Goldwater’s 1964 presidential campaign. In a 16-year political professional staff and volunteer career, he progressed from Los Angeles precinct captain to assistant and advance representative to President Gerald Ford in The White House (1975-77).

He was a Los Angeles County party organizer; headed the offices for California Congressmen Ed Reinecke (district) and Barry Goldwater, Jr. (Washington); directed President Richard Nixon’s reelection campaign in New Hampshire; and advanced President Ford’s 1976 campaign and U.S. Bicentennial events. In Washington he was a top-level assistant in the General Services Administration and for two Secretaries of Housing and Urban Development; and directed federal logistics support for Nixon’s second inauguration.

Beginning in 1956 to the Far East, he loved international travel. He led tours and cruises of WWII battlefields and sites in the Pacific, Europe, Mediterranean, and North Carolina. He visited more than 40 countries and significant islands.

Raised in St. Andrews-Covenant Presbyterian Church, he was its youngest charter member (1944), served on its 150th anniversary committee, wrote a church history, and regularly attends.

He was a professional baseball umpire and basketball referee at the NCAA Division I level through adult, high school, and youth leagues in the Northern Virginia-Washington-Baltimore region, and was president of the Northern Virginia Baseball Umpires Association.  In 1983 and 1985 he umpired the Senior League World Series (Little League’s 15-year old division)